An alternate youth culture, emo transcended music beyond the iPod Nano into the lifestyles of many adolescents. Coined through an embracement of emotional and sentimental lyrics, in an age of diminishing expectations and consumerism, emo flourised to define an era. Whilst the scene is often seen as a detrimental term, closely linked to acts of self-harm, the subsequent media backlash around its spreading influence, only fueled the movement further.

Emerging as an american punk movement in the mid-80s, with bands such as Embrace, the movement developed into the 90s with the merging of alternate rock and pop-punk. Jawbreaker and Jimmy Eat World championing this scene. By the mid-90s the midwest emo scene had developed and the advent of screamo merged and diversified a movement in its infancy. The screamo movement would go on to develop synonymously with emo with such bands as Bring Me The Horizon.

As the 00’s went on, new bands characterised by sensitivity, introversion and angst; My Chemical Romance, Fall Out Boy, the Used and AFI led the way in the spike of popularity, with strong pop-punk influences, centered around the Fuelled By Ramen label.

Beyond the 00s, emo-rap from artists such as Lil Peep paved way for a new sub-genre and contemporary artists such as Yungblud and Stand Atlantic bring new fans and audiences to this ongoing movement.

Beyond music: a lifestyle

What really differentiates ’emo’ beyond just another genre is the way it encapsulates music, fashion and broadly identity. Only in certain periods of time can you identify what someone is listening to by how they dress. Similarly to the acknowledged Punk movement, emo was based on similar tendencies of rebellion and angst. Against mainstream fashion, mainstream music and mainstream livelihoods.

They said all teenagers scare the living shit out of me, They could care less as long as someone’ll bleed, So darken your clothes or strike a violent pose, Maybe they’ll leave you alone, but not me. ‘My Chemical Romance – Teenagers

Alongside other modern movements, identity now existed in an online world. At the height of emo culture, MSN, Bebo and Myspace dominated the digital world. With added levels of personalistion, ’emos’ MSN names emblazoned lyrics, their Bebo featured their emo anthems and Myspace allowed for a music-centred platform to transcend into everyday identity.

Further transcending into livelihoods, TV channels such as Scuzz and magazines such as Kerrang and RockSound brought a further depth to identity with a continuous need for latest news and blending further mediums such as TV shows and movies.

Hanging out behind the club on the weekend, Acting stupid, getting drunk with my best friends, I couldn’t wait for the summer and the warped tour, I remember it’s the first time that I saw her there. Blink 182 – Rock Show

The plethora of bands at this time enabled the emergence of joint tours, notably the Kerrang Tour and Vans Warped Tour. These tours were a turning point for musical discovery but in America, the Warped Tour became entwined with a lifestyle and further cementation of culture.

Linking music alongside identity is a key pillar for its heritage recognition. The impact of a defining moment in music should not be dismissed on its subsequent influences. One way we can read this heritage is through the music itself, bands such as Panic! at the Disco and Fall Out Boy have taken their emo origins and transformed themselves over time, is this enough of a recognition or easily lost in time. The movement is entangled with tangible artefacts, whether that be fashion, logos scrawled on textbooks or decaying posters on a bedroom wall.

The affiliation to emo culture added context to other locations within towns and cities. Meeting groups of emo culture became destinations and communal spaces, where individuals form different backgrounds could bond over music and culture. Breathing life and identity into urban cityscapes.

In relation to venues and gigs, emo fanbases are arguably some of the most loyal. Communities in this instance are made not just in the venue, but outside, bonding with fellow fans, queuing for hours. Whereas this culture originally stemmed from music, it’s sometime forgotten the breeding ground is in the venues themselves. Grassroots venues lifted emo bands from a niche scene to a wider audience through establishing the link of merch, spreading the bands influence and cultural identity further. 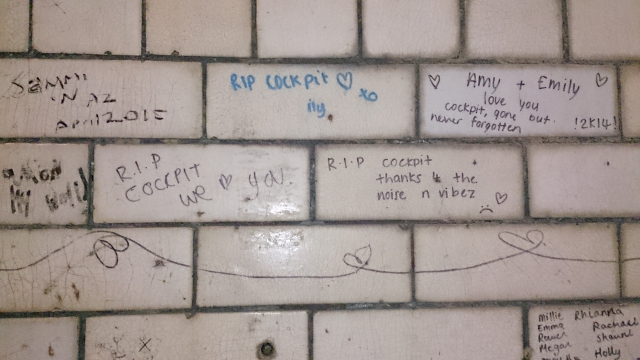 Whilst the majority of emo bands aren’t synonymous with a particular venue, the circuit of the late 00’s remains key. Thinking about the emo scene, the same reliance isn’t on grassroot venues but on those slightly larger due to the international touring of many american emo bands. However the important consideration is that these styles of venues became the next step in the ladder, achievable through a bit of hard graft.